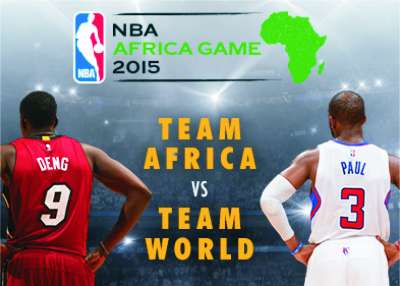 The game will take place following the 13th edition of Basketball without Borders (BWB) Africa, the NBA and FIBA’s global basketball development and community outreach program that has reached 1,000 campers from 31 African countries since 2003.

As part of BWB and NBA Africa Game efforts, NBA Cares, the league’s global social responsibility program, and the NBPA Foundation will host a series of events to leave a lasting legacy in the community. With support from Ford, local youth will participate in a Jr. NBA clinic on Wednesday, July 29 at the American International School of Johannesburg. Also at the school, Hoops 4 Hope will conduct life skills sessions presented by South African Airways. NBA players, coaches and legends will hold sessions on leadership and health and wellness for BWB campers throughout the week.

Members of the NBA family will gather at the newly built Boys & Girls Club at Protea Glen on Thursday, July 30 for a basketball court dedication and clinic presented by NIKE.

Friday, July 31 will mark the third consecutive year that NBA players will visit SOS Children’s Village Ennerdale, an organization that builds families for orphaned and abandoned children. NBA Cares and the NBPA Foundation have undertaken their largest commitment to the village to date, working on a range of projects from the refurbishment of the local library to the construction of a new basketball court.

The NBA has a long history in Africa with more than 35 players from the continent featured on NBA rosters since Hakeem Olajuwon was drafted in 1984. The NBA opened an office in Johannesburg in 2010.

Sold-Out NBA Africa Game 2015 will air live in the U.S. on ESPN and in Africa on SuperSport