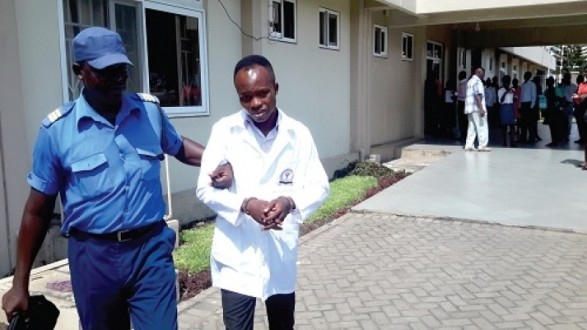 A 25-year-old unemployed man was yesterday arrested for allegedly posing as a medical student doing his housemanship at the Korle Bu Teaching Hospital in Accra.

The fake doctor, identified as Ibrahim Nurudeen, was arrested while he was in an apparel with an embroidery of the Korle Bu Teaching Hospital logo on it and was busy attending to patients at the Surgical Block of the hospital.

About 10 a.m. yesterday, a source at the hospital said, private security personnel at the facility who had been monitoring Nurudeen’s movements for the past one month approached and arrested him when they found out that he was not a medical student.

The source said Nurudeen had, for the past one month, been seen at the Surgical Block, sometimes attending to patients or sitting busily behind his laptop.

“He usually chats with personnel at the wards and the security post and is very friendly,” it said.

Missing items
The source said the security personnel were put on high alert when the workers at the Surgical Block started reporting of missing money, laptops and mobile phones.

“This morning, one of the security personnel approached Nurudeen while he was moving from one ward to another and was using the lift to the fifth floor. The security man asked him if he was a medical student and he answered in the affirmative, but he could not produce his identification card when he was asked to do so,” it said. When the security personnel asked him to follow them to the Administration Block, Nurudeen pleaded with them to let him go, as he was not a medical student as earlier claimed. Before he was handed over to the Korle Bu Police, Nurudeen broke down in tears and told the Daily Graphic that he had graduated from the University of Ghana in 2013 with a degree in Agriculture. “I have been unemployed since, but since I had always had a passion for medicine, I felt like practising it to have a feel of it,” said Nurudeen, who claimed to have obtained his apparel from a friend whom he failed to name. “I am really disappointed in myself. I am sorry,” he said.