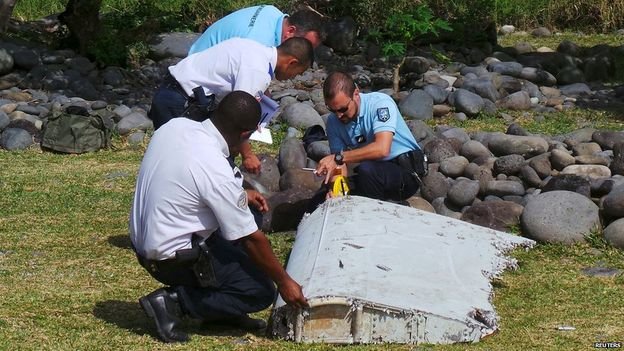 Debris found on the Indian Ocean island of Reunion is to be transported to France to find out whether it is from the missing airliner MH370, Malaysia’s prime minister has said.

Initial reports suggest the two-metre long object is very likely to be from a Boeing 777, Najib Razak said.

Malaysia Airlines flight MH370 was travelling from Kuala Lumpur to Beijing in March 2014 when it vanished.

The search has focused on part of the southern Indian Ocean east of Reunion.

There were 239 people on board the plane when it went missing.

Mr Najib said French authorities were taking the debris to the southern French city of Toulouse – the site of the nearest office of the French body responsible for air accident investigations (the BEA) – to verify it as quickly as possible.

A Malaysian team of investigators and representatives from the government and the airline was travelling to Toulouse, and a second team to the site of the find on Reunion, he said.

Najib Razak said the location was “consistent with the drift analysis provided to the Malaysian investigation team”.

“As soon as we have more information or any verification we will make it public. I promise the families of those lost that whatever happens, we will not give up.”

The object appears to be encrusted with barnacles

Aviation experts who have studied photos of the debris found on Reunion on Wednesday say it does resemble a flaperon – a moving part of the wing surface – from a Boeing 777.

All aircraft parts carry a serial number which should aid identification.

On Thursday, a municipal employee found what appeared to be part of a very badly damaged suitcase on the Reunion coast, according to local media (in French).

The item was found at Saint-Andre, the same location as the earlier debris, and by the same man.

Reunion, a French overseas department, is about 600km (370 miles) east of Madagascar.

Search efforts for MH370, led by Australia, are focused on an area west of the Australian city of Perth – around 4,000km east of Reunion.

The Australian government has described the discovery of the wreckage as “a very significant development”.

This item, possibly the remains of a suitcase, was also found on Reunion

The wife of the in-flight supervisor for the missing plane, Jacquita Gonzales, told the BBC that she was “torn” by the news.

“A part of me hopes that it is [MH370] so that I could have some closure and bury my husband properly but the other part of me says ‘no, no, no’ because there is still hope,” she told the BBC by phone.

After MH370 disappeared from radar screens, experts analysed data from faint “pings” the aircraft sent to satellites to narrow down its possible location.

Oceanographer David Griffin of Australia’s national science agency told the BBC that the location of the find was “consistent with where we think debris might have turned up”.

More than half of those on board the plane were Chinese citizens.

A spokesperson for China’s Foreign Ministry said: “We have noticed the reports and are wasting no time in obtaining and checking the information.”

A group of relatives of many of the Chinese passengers said in a statement that they wanted “100%” certainty about where the part is from, and that the search for the airliner should continue.

A Deputy Minister of Information, Fatimatu Abubakar has indicated that kidney and liver diseases …