Rules over how female students wear their hair at a South African high school have been suspended after anti-racism protests from black pupils, a local minister says.

Pupils at Pretoria Girls High say staff often tell them to straighten their hair and they are not allowed afros.

School rules would be suspended while an independent investigation takes place into the allegations, Gauteng province’s education minister said.

The school has not commented.

Its code of conduct has a detailed list of rules about hair, but does not specifically mention the afro hairstyle.

Photos of the schoolgirls’ protest went viral over the weekend and have sparked a national debate on race, with the hashtag #StopRacismAtPretoriaGirlsHigh used more than 150,000 times on Twitter. 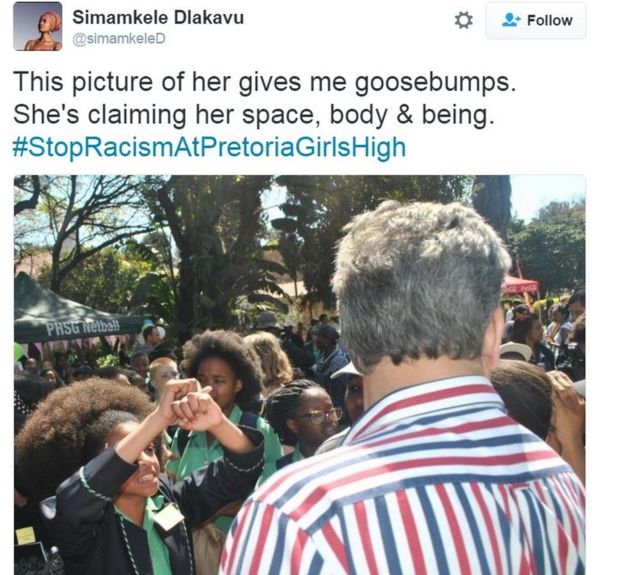 Gauteng Education Minister Panyaza Lesufi, who held emergency talks on Monday with pupils and administrators at the prestigious private school in the capital, criticised its “stone-age rules” on hairstyles during an interview on Talk Radio 702.

During his visit, black pupils told him that some staff at the school “tell them they look like monkeys, or have nests on their heads”, a statement from the Gauteng Department of Education said.

“The mocking of African learners’ usage of their mother tongue must stop.

“In fact, the diverse use of languages (especially African languages) must be encouraged for all learners at the school,” it added, in response to reports that black pupils had been chastised for speaking their own language in class.

White-minority rule and legalised racism, known as apartheid, ended in South Africa in 1994.

Pretoria Girls High was founded in 1902 as a multi-racial school, according to its website, but was a whites-only institution during the apartheid era.

A petition calling for an end to racism at Pretoria High has gathered 25,000 signatures.

Nigeria has slipped into recession, with the latest growth figures showing the economy con…